Ammonia – from protein to air pollution

As winter thaws into the beginnings of spring, so too will we be confronted with elevated levels of ammonia in the air, easily recognisable by its pungent, unpleasant distinct smell and increased smog around our cities and towns.

While, Nitrogen molecules, N2, make up 78% of the air we breathe and is relatively inert, ammonia, along with other nitrogen-based compounds which include the nitrogen oxides (NO and NO2 – collectively NOx); nitrates/nitric acid of (NO3-); and the super potent greenhouse gas, nitrous oxide (N2O) all contain reactive nitrogen.

In nature, ammonia is the foundation for amino acids, proteins, enzymes and DNA, and thus central to the metabolism of all life forms. Nitric oxides act as a key biological-signalling compound, while ammonium (NH4+) and nitrate are the major nutrient forms of nitrogen essential for plant growth. The challenge is to produce more food and energy with less pollution. Today, most ammonia found has been manufactured for fertilisers. Too much nitrogen compounds contribute significantly to the growing pollution problem, harming both human health and contaminating our environment. 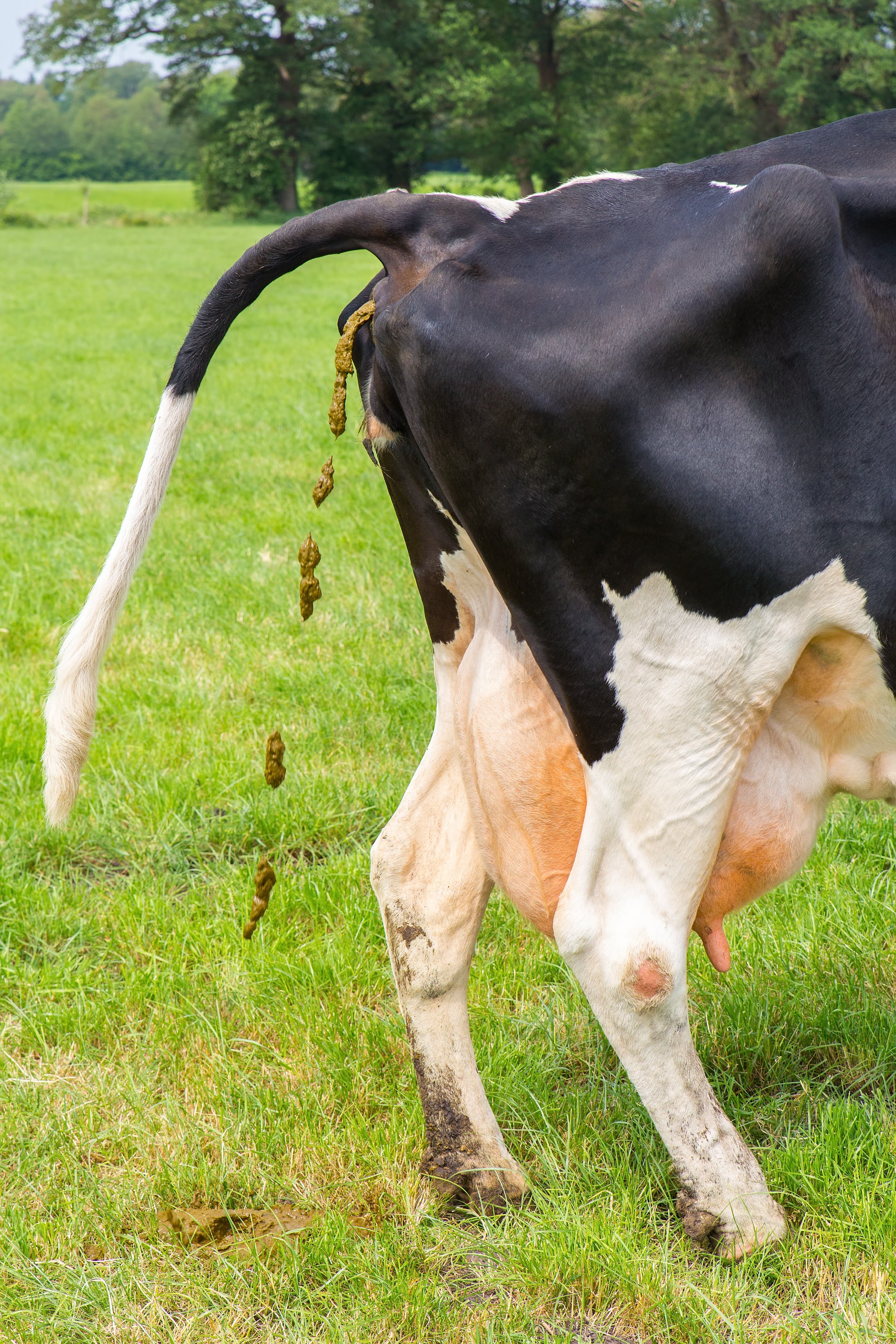 Perhaps the largest problem of ammonia emissions (NH3) is its role in the formation of Particulate Matter (PM). While ammonia is in the atmosphere for just a few hours it remains for several days when converted to PM. PM are micro-particles smaller than 10 microns in diameter. Of particular concern to public health are the smaller particles, around 2.5 microns in diameter, also known as PM2.5.

When returned to land, PM2.5 can cause significant long-term harm to sensitive habitats, depositing more nitrogen onto soils and plants, and into freshwaters, than they can cope with.

As a direct pollutant, ammonia in high concentrations burns the eyes, nose, throat and respiratory tract. Inhalation of lower concentrations can cause coughing, and nose and throat irritation. In the presence of moisture, ammonia can form vapours which spread along the ground or other low-lying areas. Ammonia reacts easily with water to produce ammonium hydroxide which is a corrosive chemical and damages cells in the body on contact.

PM2.5 contains several pollutants and includes primary particles from natural components such as dust and sea salt but also secondary particles formed in the atmosphere by chemical reactions between what are known as precursor gases. Ammonia is one of the main precursor gasses in the formation of both main secondary inorganic PM species, ammonium sulphate ((NH4)2SO4) and ammonium nitrate (NH4NO3). In European urban environments typically 40 percent of PM2.5 is made up of these secondary particles. In this form PM2.5 can travel very long distances before being deposited back to land from rain or snow.

Concentrations of PM2.5 in most EU cities are significantly higher than the EU limit which itself is more than double the limit suggested as being safe by the World Health Organisation.

Ammonia emissions emerge predominantly from agricultural sources and while other precursor gasses such as Sulphur dioxide (SO2) and NOx emissions mainly from power generation, industry and the transport sector have decreased as a contributor due to regulation, ammonia emissions have remained stubbornly high and have even increased.

For a farmer, ammonia emissions represent loss of nitrogen, leading to supplementing nitrogen need with purchasing chemical fertilisers. Reducing losses would not only improve air quality, but directly improve yields. In agriculture, ammonia is emitted from livestock housing, during storage, landspreading and deposition of manures and slurries, and from application of chemical fertilisers, and is a main source for air pollution in Europe. As an example, the pie chart below gives a breakdown of agricultural ammonia emissions by source in the UK. 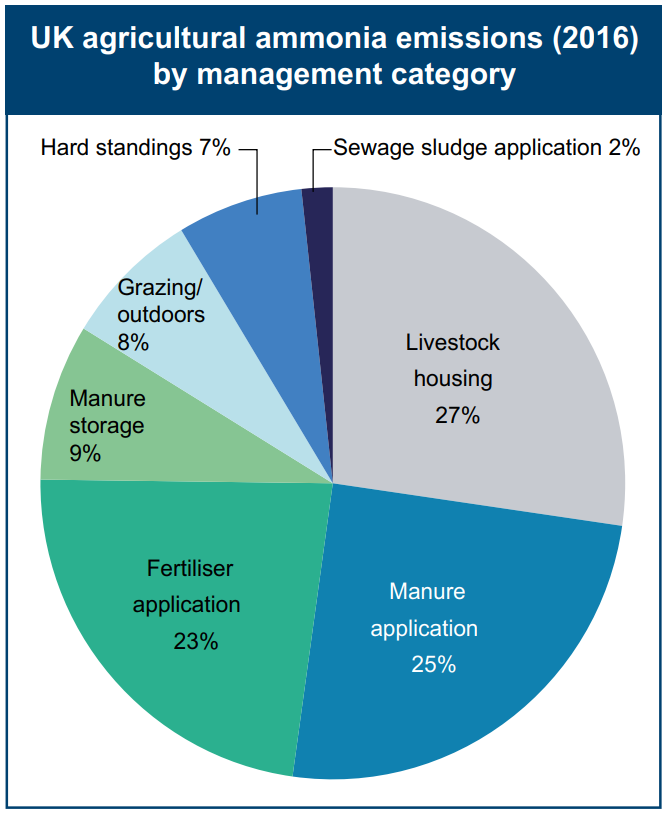 Through the UK Clean Air Strategy from 2019 ammonia emissions from agriculture is particularly addressed.

Implementing measures to curb ammonia emissions is not without their own complications. The various nitrogen compounds readily react with each other and even the loss of ammonia to inert nitrogen molecules (called «denitrification») represents a loss of available nutrients which, in turn, causes additional demand for chemical fertilisers and even more emissions.  So, measures intended to reduce nitrate pollution such as prohibiting manure application to land in winter «closed periods», has led to an increase in spring-summer manure application, which in turn resulted in an increased peak in atmospheric ammonia concentrations. The recommendation to bring cattle indoors to reduce climate-relevant emissions of N2O, may also lead to an increase in ammonia emissions.

Taking actions on a global and national level

The potential negative effects of ammonia pollution are on the agenda globally through the work of the UN, within the EU and down on a national level like in the United Kingdom. The Gothenburg Protocol which is setting national emission ceilings are ratified by more than 50 parties covering North America and almost the entire Europe.  Reducing ammonia emissions will require efforts at farm level such as improving nutrient use efficiency in crop production and in animal production while increasing the fertiliser equivalence value of animal manure. The nutrient content and availability of manure can be affected by storage, handling and spreading practices that reduce ammonia losses. These ones, as well as several others, are described in the Guidance document on preventing and abating ammonia emissions from agricultural sources from the UN.

Can the EU Turn the Tides on Increasing Ammonia Emissions?

How to turn your slurry into smelling like dark chocolate